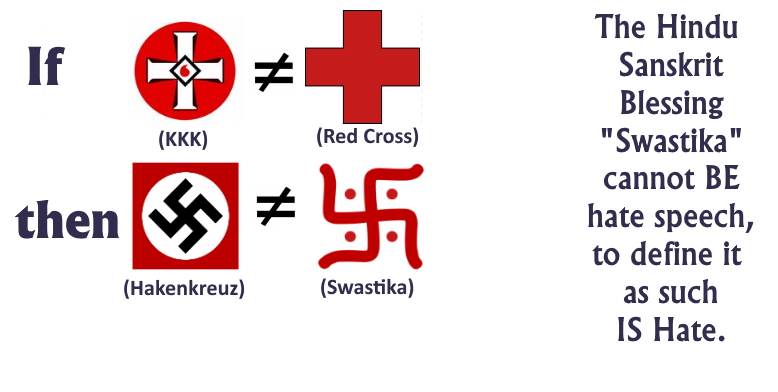 The Swastika Under Assault in 21st Century New York

Naturally, the Swastika and its equivalents hold immense sacred significance for Hindus, Buddhists, Jains, Native Americans, and many other cultures, and are thousands of years old. As a Hindu, I cannot imagine life without sacred symbols like Om, Swastika, Trishul, Tilak, and others. They form a deep connection through which we express our identities while connecting with the Divine. Each has its unique place in Hindu symbolism and practices.

On a late June afternoon, I received a WhatsApp message that the State of New York was considering a bill that would mandate that the Swastika be taught as a symbol of hatred and intolerance in all New York schools. Nikunj Trivedi. CoHNA

Undoubtedly, educating students about hatred, racism and bigotry is essential. This is even more urgent, given the recent increase in hate crimes against Jewish and African American communities. Incidents of Neo-Nazi emblems being graffitied outside Jewish homes and synagogues, often accompanied by horrific acts of violence by hate groups have seen an alarming increase. Hindus and Sikhs have also been targets of of Neo-Nazis and those who support Nazi ideology.

“[This bill] requires instruction regarding symbols of hate, including the swastika and the noose, to be incorporated into the curricula for grades six through twelve.”

(Note: As of July 2020, the bill has been stalled due to widespread outrage among Hindu, Buddhist, Jain and other communities due to the deeply religious significance of the Swastika in these traditions).

Yet, the important work of fighting bigotry and racism must not inadvertently stoke resentment against other religious minorities. This was the  Hindu community’s concern about including the Swastika as a hate symbol in the New York bill without proper context.

Every loss of every freedom is presented as a "benefit", including the "Education" of indigenous children. In this attempt to erase the ancient Swastika, do we see the same colonialist strategy at play?

For most Americans, it's an instinctive reminder of hatred and a historic horror. But centuries before the Nazis hijacked it, the swastika was an ancient symbol of good luck, prosperity and creativity for Buddhists, Hindus, Jains and a sacred symbol for Navajos and Mayans--who used it in a healing ceremony before white Europeans arrived in North America or Mexico.

Then, Adolf Hitler bragged in Mein Kampf about appropriating when he designed the Nazi flag. The swastika became forever linked to that evil. And New York lawmakers have proposed legislation that "requires instruction regarding symbols of hate, including the swastika and the noose, to be incorporated into the curricula for grades 6 through 12."  The bill passed the Senate in July.

"We cannot get complacent and assume this issue will not come back. Indeed, the incidents of hate that prompted it regrettably can be expected again in future." The goal was to "foster mutual respect and tolerance" for all faiths.

Similar legislation has been proposed in several states. The Coalition of Hindus of North America urged people to contact their legislators to ask for the same sort of expansion that the New Yorkers suggested. The CoHNA website first applauded the legislation's intent of cultivating tolerance and inclusiveness then detailed its passion for the issue this way:

"Educating students about hatred, racism and bigotry is essential. This is even more urgent, given the recent increase in hate crimes against the Jewish and African American communities within the State of New York. Incidents of the (neo-)Nazi emblem being graffitied outside Jewish homes and synagogues, often accompanied by horrific acts of violence, by anti-Semitic and white power groups have become an alarming recurrence. As a Nazi emblem, the swastika in the West is inscribed with the transgenerational trauma of the eleven million Jews and others killed by Nazi persecution, and its use today is meant to have a chilling, intimidating effect on Jewish Americans when used in these ways. It is important to recognize it as such."

"Yet, as we see the interwovenness of religious bigotries, the important work of fighting anti-Semitism and racism must not inadvertently stoke resentment against other religious minorities," the CoHNA statement continued.